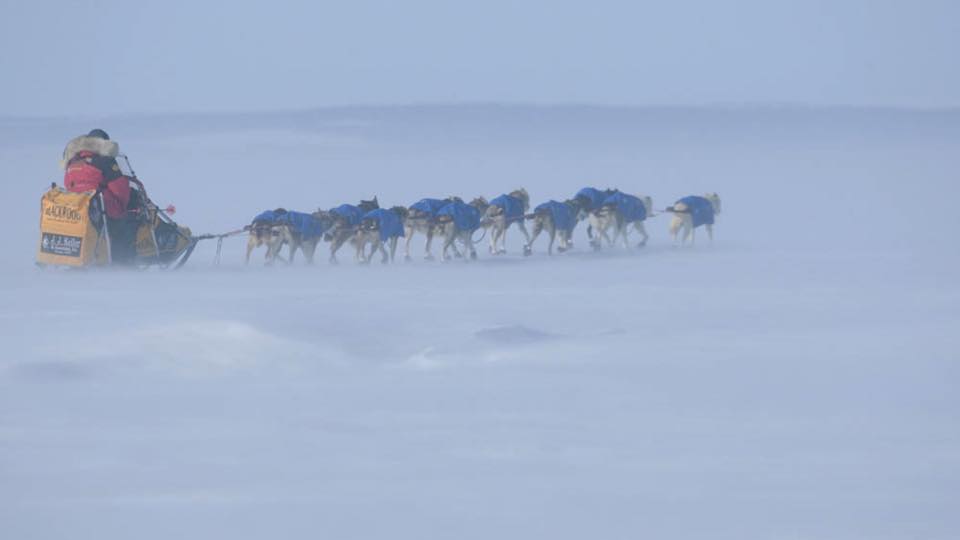 Robin did it again. He made it through another winter. He still honors his hardy arctic breed by crossing the cold floor barefoot every morning from bed to food dish. He loves collecting pats on the head and ear scratches along the way. He’s the undisputed king of the kennel.

He’s not a fan of cold weather anymore and volunteers to guard the wood stove most days. To keep in top shape, he sometimes totters around the shop until someone insists that he go outside for a minute. He does so without complaint but keeps an eye on any human outside in case they start for the door. Then, with astonishing enthusiasm he dashes for the opening to go back in, enormously satisfied with himself for his quickness and stealth. The human involved will patiently hold the door for him for as long as it takes. He’ll be 16 this summer and we don’t think he’s changed much in the last 5 years.

Now that spring is here, he loves to be outside, shuffling around the lawns sniffing everything. He used to catch voles in the grass, but he has recently cut a deal with them. “You don’t get too close, and I won’t use my lightning speed to catch you.”

As he explores the grounds, sniffing over every inch, it seems like Robin is always looking for something he’s lost. The Iditarod Trail, someone suggested.

Ditka is 14 and lives at the shop too. Unlike Robin, he still loves to show off his youth, by escaping every chance he gets. He always heads straight to the dog lot, right to his old spot in the A-team section, first house on the right.

Ditka was an outstanding lead dog. He and his brother Payton led the entire 408 miles of the All Alaskan Sweepstakes in 2008, setting an historic record. He was my main leader in the 2009 Iditarod, and as we headed out of Shaktoolik we plowed into a 30 mile-an-hour headwind and minus 35-degree temperatures. I planned to go a ways further and camp at the shelter cabin. Ditka was in single lead doing his job without fanfare.

That describes his style. No fanfare, no fuss, not a lot of jumping up and down and hollering. Just get the job done. Not the fastest, or sharpest, or most handsome. Friendly enough but not needy, and always there on the A-team to get it done for me.

The trail was well marked leaving Shak but sometimes the team would begin to wander off the trail and I had to stop and clear snow from their eyes so they could see. I kept coats and wraps on them and everyone seemed to be doing okay. After awhile I stopped again to feed the dogs. Now, when we stop, I like the lead dog to stay lined out, pointing forward to prevent any tangles or fooling around in the team. As I pulled out the food bag, I saw Ditka still in front of the team, but sitting down facing the sled, back to the wind. My first instinct was to call out to him to line up as he knew he should, but I caught myself. He’s smart enough to be my lead dog and get us through this weather to the shelter cabin, I thought, he’s also smart enough to turn his back to this wind when he can. I said nothing and handed him his fish. He chewed nonchalantly.

“Ditka, ready?” Off we trotted into minus 70-degree wind chill. Apparently not a big deal.

Ditka’s totally deaf now and doesn’t respond to verbal commands. He does respond readily to either fish snacks or Milk Bones.

Robin pretends he’s deaf too. He doesn’t hear if you call him at the top of your voice but if you spill a few kibbles of dry dog food on the floor, he will magically appear. His Iditarod career was cut short by an unusual injury to his wrist. Cut-off brush beside the trail can have sharp ends, referred to by mushers as “punji sticks.” Robin got stabbed and sent home from the checkpoint of Iditarod. He wasn’t supposed to ever run again, but nobody told him that, so he did dog sled rides and tours up to 30 miles a day, the rest of his career. His career ended several years ago, and he became a pet at the home of my son Danny and his family.

Things didn’t work out too well in the hood for Robin. The dominant rival gang was officially named Ungulates, but everyone just called them moose. One day there was a drive-by hoofing right in the front yard and Robin’s back was messed up. He was found under the porch and taken to the hospital. As soon as he was well enough to travel, he put in for a transfer, ending up back at my place. We kept him in the shop and gave him daily pain relievers while he healed up, hoping he could go back to the tours. He hasn’t seen fit to move out in five years. He also hasn’t quit his pills.

During the winter when Robin was 12, in January I believe, he had a stroke-like event and seemed to be partially paralyzed. We rubbed him down with Essential oils and hoped for the best but prepared ourselves for the worst. I thought, “It’s been a good run I guess, he’s 12 years old.” He somehow recovered overnight, and the symptoms didn’t return.

Not for a year. Then he did the same thing the next January. Seemed partially paralyzed for a day and a night. We prepared to say good-bye. “It’s been a good run I guess, he’s 13 years old.” He recovered overnight. The symptoms didn’t return.

So, if the old fart tries that next January, I’m SO not falling for it again.

His buddy Ditka just got out a few minutes ago and headed for the dog lot at full-speed. I mean full-speed with intention. No-nonsense, get the job done, Ditka full-speed. Well, if he gets down there some young male might try to grab him and hurt him, I guess. I gave chase and caught him in about 25 yards. He looked slightly offended. You, outran me?

“No, you’re the man Ditka, you’re still the man,” I said. “I’ve just been working out more lately or something.” He didn’t hear me.

Robin just trotted by going the other direction with a big piece of fish he had stolen from a bucket by the meat saw.