Because We Don’t Fly South for The Winter

Some northern folks are, like schizophrenic. They endure a miserable summer up here but come fall they’re as gone as the reindeer sausage vendor on a cruise ship dock. Gone, for someplace like Arizona or Florida or Belize. Snowbirds, some folks call them. Anti-snow birds, looks like to me.

They’re “sometimes” northerners. They list their residence as Kenai or Whitehorse or Minot, but if you drive by their address in January the driveway is three feet deep in snow and the door is barricaded with newspapers. Well, not actual newspapers because nobody buys those anymore, except to start wood fires or wrap salmon or northern pike. Probably just sales fliers from Cabela’s.

But check the car in the driveway. That bump in the snow there, suggests where to start digging. Shovel it out you’ll see it doesn’t even have snow tires on it, so it obviously hasn’t been driven since September. Nobody home. But why even dig it out? They’re not coming back until the snow melts.

I have actually done this. I dug this old guy’s car out several times, every two weeks in fact, during December and January, just being neighborly. The last time I was there shoveling though, here comes this 25 or 30-year-old girl in a big hurry. She shoved her way past me without so much as a hello or thank you – on the path I had just shoveled, mind you – snapped something about a welfare check on granddad and used her key to gain entrance to the residence. I just got in the truck and left. Some people’s kids.

I know people with otherwise perfectly good sense who fly down south every year. They golf and swim, play tennis and pickle ball. They go to concerts and shows. They eat on the patio and get tans – in December, no less. And, they pay good money to do it too! Unbelievable.

What’s the difference between swinging a snow shovel and swinging a pickle ball paddle anyway? Hmmm? And how is a Lionel Richie concert better than watching a sled dog race? Obviously northern lights beat Cirque de Solet any day. Pan seared orange roughy atop the Space Needle or a chili dog heated on the muffler of your snowmachine? No comparison.

I understand some people just have poor priorities when it comes to summer and winter. What really baffles me though, is after missing the best part of northern life – winter – they all come back in the spring, pretending they belong here. Well, I have news for them! What true northern folk, on the streets of Anchorage, have a Calvin Klein tan in April?

“Martha dear, you look wonderful. I swear, not a day over 69. We should head back north before you turn into a teen-ager again.”

“Why Harold, what a sweet thing to say, but what on earth could be wrong with that? And you look great too. As good as that singer we watched last night, I’ll tell you. What’s his name, Benny, Benny something?”

“Yes, dear. Thank you dear. Umm, I think we’d better head north. Enduring the miserable summer up there might be good for us both. Clear our heads.”

I have tried to explain this to my wife, Janine. She grew up in the south, so she’s already at a disadvantage in understanding these things. She and I have friendly arguments, usually not involving frying pans, stove pokers or the cops – about the virtues of summer vs. winter.

“I can’t wait for warm weather, so I can go outside wearing shorts and a summer top,” she proclaims every March.

“Long underwear goes on September 15 and come off April 15,” I remind her, “And if that’s not comfortable for you, you need more saturated fat in your diet.” Saturated fat is on the same list as radioactive hog bile in my wife’s diet plan.

She still has the heavy skillet my mother gave her, and pulls it out from time to time, though she rarely ever fries anything.

So why do I risk battle with Janine and in the midst of our marital bliss to discuss summer vs. winter in the northland? Because she’s wrong, that’s why! Well, misinformed, is “more receivable,” according to the counselor.

I mean, she had a deck built on our house approximately the size of a voting precinct in New Hampshire. Finest materials, glass railings, so we can “see through and enjoy the view.” Big plans for the grandkids to enjoy it.

But for seven months of the year it’s too cold to sit out there and enjoy anything, unless you enjoy doing scientific studies involving winter clothing and hypothermia. For six months it’s covered with snow and the glass railing is frosted over like a car windshield at 6 am, so you can’t see a bloody thing. That leaves about a quarter of the time when the deck is usable. But busy people like us don’t have time to sit on decks, even on the 4th of July. Estimating the number of people using the deck and the number of hours used a year, the cost per unit of enjoyment is something like maintaining a couple of riding horses around here, after your kids have left home.

Oh, and that was the second time it was built because the first one was wooden and fell off the back of the house, victim of ants and dry-rot, just as we were preparing to use it for the second time – ever. So, the cost per unit of enjoyment is more like the horses, plus an ocean-going power boat — after the kids have gone.

My young grandson did have a great time on the deck, once. A Trumpeter Swam, largest bird in Alaska, buzzed the house a final time before heading south for the winter (obviously taking a cue from the couple renting the Andrus place to the east of us). And, I don’t care what Janine says, I know it was fippin’ me off with its left foot. My granddaughter says that is technically not possible with webbed feet, but I know what I saw, dammit. As the “bird” awkwardly gained altitude, it loosed it’s payload, and scored a bulls-eye on Janine’s deck. Grandson went out to investigate, in bare feet.

Now, when I say largest bird, I mean like a big dog. Imagine a fat Labrador Retriever sitting around all summer, eating only vegetable matter, getting no exercise, then suddenly deciding to jump into the air and migrate 2000 miles. At 25 feet above the ground in a headwind and afraid he might not clear the stovepipe of my house, his brain issues the order that all excess weight must be jettisoned.

Grandson’s feet were quite warm at first but cooled after several minutes and he came back inside. He crossed the expensive carpet, climbed over the expensive sofa, down grandma’s expensive afghan blanket and did a little dance on the expensive throw rug. His mother, apparently not noticing, contracted a sudden and severe headache and retreated to the guest bedroom.

Janine does agree that the deck, as a bombing target for large birds is not optimal, but sees no diminished value since she’s quite sure I’d be happy to clean the deck regularly. The negotiated settlement has me cleaning the deck before each planned use, which, and I’m especially proud of this clause, is never.

Janine likes summer for all the same dumb reasons everyone else does, so to avoid repeating our sometimes-colorful conversations, and boring you with her false ideas about summer, I will simply tell you all the reasons why winter is better.

There are no bugs.
Nobody expects my truck to be clean.
Sled dog training is in full swing.
It’s cold enough to enjoy a good wood fire.
Cleaning up after the dogs is so much easier when frozen.
Meat and fish can be kept frozen just sitting outside.
No bugs.
Northern lights are awesome.
Dog mushing on snow beats dirt, hands down.
Swamps and lakes are frozen, so I can travel anywhere.
Leaves are off the trees, so I can see where I’m going.
I can ride a snowmachine to the post office.
No bears.
It’s dark most of the time so I can sleep.
The property looks better with snow covering most of my junk.
I know how to dress every day.
Winter clothing doesn’t care if you gain or lose a couple of pounds.
No road construction.
(This topic deserves more explanation but after thinking about the deck, I’d better let my nerves calm, and address it another time.)
No traffic.
Trumpeter swans don’t crap on my deck.
There are no bugs.

Even with all this irrefutable evidence she remains unpersuaded. And now that the Iditarod Race is over, she wants to resume walking and jogging on our field and local trails. We both really enjoy doing that together. I’m excited to start running too, and conditioning for a half-marathon in August.

One thing’s for sure, you won’t be seeing this kid out there until the weather warms up and the rest of this snow melts. So, okay, there may be one or two good things about summer. 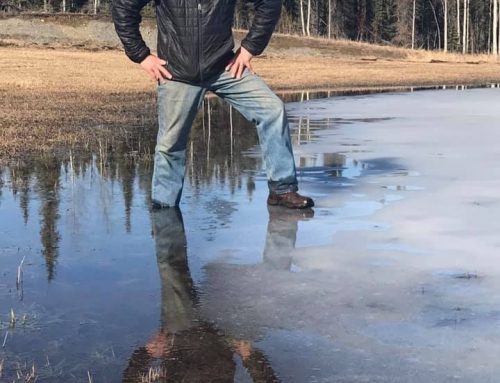 I Can See My Reflection