I decided to try something new, instead of the usual ‘Pick the Top 10’ I’m going to convert each musher’s chances of winning into odds. It’s a lot harder than it looks, because there’s only 100% to go around. When I went down the list and gave them all what seemed like reasonable odds, it added up to almost 300%, and only one musher gets to win. It was educational to realize just how slim each mushers’ odds are. I wrote this before teams reached Yentna, so it doesn’t take any race action into account, and I’ll update and try to add odds of top-10 finish as we go.

There have been 47 Iditarods, 22 different mushers have won

11 mushers have combined to win the past 33 races

The only time I know of Vegas offering a bet on the Iditarod it was Lance Mackey vs. the field at even odds circa 2009. Lance won.

So here goes, feel free to comment as you see fit, lines are subject to move:) 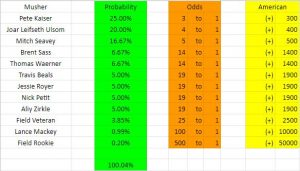 * Vegas odds add up to more than 100%, that’s the profit for the casino, so I’d have to make them shorter before I start accepting bets:)

* Gambling is not legal in Alaska